Designed by St. Augustine architect Francis Hollingsworth, the St. Augustine Beach Hotel is one of two remaining structures from the St. Augustine Auxiliary Pier Project constructed in 1939-1940 by the Works Progress Administration (WPA). A mirror-image hotel was located north of a wooden fishing pier originally constructed in the approximate location of the St. Johns County Ocean Pier. A seawall and boardwalk were also constructed as part of the WPA project.

The St. Augustine Beach Hotel and the pier, now known as Pier Park, quickly became one of the most popular beach access points. Business generated by Pier Park played a key role in the economic development of the community of St. Augustine Beach. The building exterior is made of coquina, a local stone formed from deposits of shells accumulated over thousands of years. Coquina was quarried from Anastasia Island by enslaved Africans to construct the Castillo de San Marcos. Its use as a building material continued but was relatively limited by the mid-20 th century, requiring reopening of the quarries for the construction of the Hotels.

In 2022 the St. Augustine Beach Hotel was listed on the National Register of Historic Places for its national significance related to the passage of the Civil Rights Act of 1964.

For more than two decades, the St. Johns Cultural Council has maintained the building as a community center for arts, culture and heritage programming through agreement with the City of St. Augustine Beach. Grants have funded significant restoration efforts, and the ground floor is now home to The Dance Company and the St. Augustine Beach Art Studio and includes a community space that is available for rent to cultural organizations. A recent $500,000 grant from the Florida Department of State will fund additional restoration, primarily on the second floor of the building. 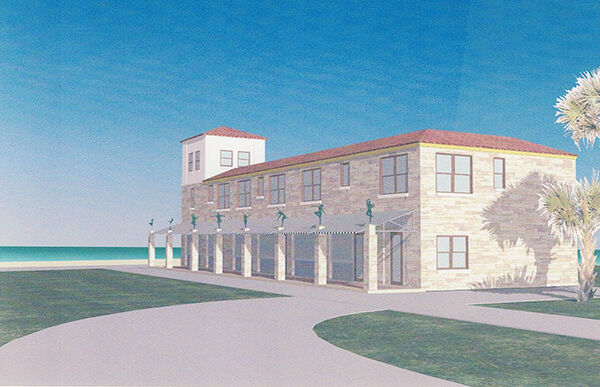